Scrunched up messiness and euphoric, wide-eyed prettiness- she’s all of that with the intensity of a snarling tiger for a soul... Intimate, confessional and bittersweet. Maybe music like hers never existed until right now - but regardless, here it is, and it sounds like something new to me.

This is a musician who has much to add to the world of music.

Probably the most important artist you have not heard yet. 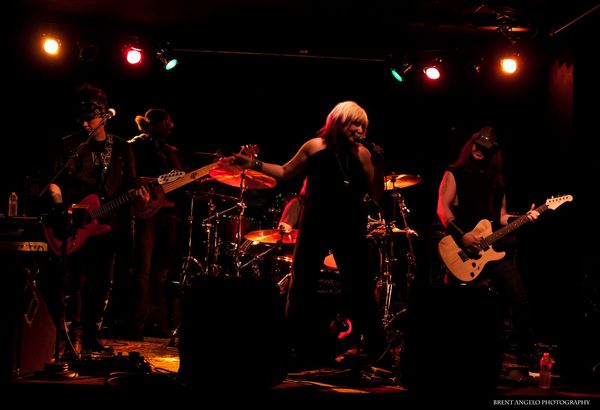 Rod Stewart famously sang about blondes having more fun, and Michele certainly has her audiences smiling. While her songwriting style reflects both late-seventies Punk and early-eighties New Wave, her primary influence is life itself; her lyrics poetically conveying the everyday agonies and ecstasies of the human condition she witnessed and experienced in full,traversing the American hinterland playing out-of-the-way spit-and-sawdust dive bars slowly building up a loyal and dedicated fan base. The Seattle-based music site, www.thewigfitsallheads.com, proclaimed “Keep an eye out for this lady, she’s going places!” and Michele’s hard work and dedication has ultimately seen her reaping the rewards.

Michele, a direct descendant of the tailor to the ill-feted Czar Nicholas II, has proved herself a cut above - receiving lavish praise for each of her three solo EP releases both in US and abroad. She is currently in pre-production on her fifth solo release having written and recorded music alongside renowned guitarist and songwriter, John Ashton, of Psychedelic Furs fame. The new music features four Pfur’s alum Duncan Kilburn, Joe McGinty and Roger Morris as well Matthew Washburn (Mastodon producer,) Frank Coleman and Fred Shreck providing the musical landscape that takes her “heart on your sleeve” lyrics and emotionally impactful vocals into the stratosphere.

Originally slated for an early 2019 release, at the close of 2018 Michele unexpectedly found herself watching her best friend and mother die before her eyes, losing her  to cancer. Although she shared the new music with her mom before she left, the rest of the world needed to wait as Michele pushed herself past the shock and pain of her greatest loss. 2019 was a long and challenging year culminating in an early cancer diagnosis for the artist herself. In true form, following a major operation and no further treatment, Michele beat the odds (once again) only to wake up to a world under the spell of a global pandemic. Even with all of that, Michele remains dedicated to her new release and to the future.

in 2005 Indie-Music.com proclaimed her debut album 85th and Nowhere as “filling a void in today’s Top Ten, infusing it with some much needed sophistication and thoughtful song-crafting.”  Such heady praise is wholly merited as Michele is imbued with a steely determination to continue forging her unique identity on an ever-changing musical landscape.

For more insight into Michele visit her remarkable story as it unfolded and unfolds .

ALL ABOUT THE NEW MUSIC  with JOHN ASHTON of THE PSYCHEDELIC FURS along with an incredible dream band! Meet them here.