Back to all posts

This is why music matters. This is its magic.

Martin Atkins: "So how did you get your start?"

Me: "I arrived  in a city and went around town introducing myself as a musician so people started asking me to play gigs. I said  "yes" and then went and wrote some songs,  formed a band and showed up to the venue. " (Come back when you're done here and read more. )

Martin: "That is very punk rock." 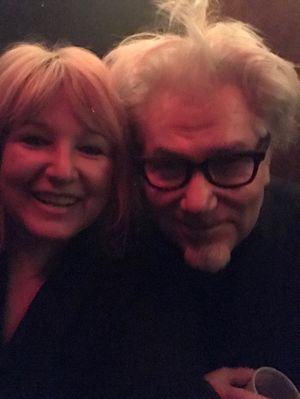 He bought me a drink. But he already had my seal of approval. Up until last night I only knew him thru some interactions on Twitter and a bit through stories from John Ashton that he told to me when I was in the studio with him about his days touring with The Psychedelic Furs in the 80s. Whether in a story, in person or though stories of his own, at every turn he has just been, well, very cool. And nice. Genuinely nice. He offered to have me come early so I could pick his brain about the music biz. Ask one who knows right?. Of course I did this.  Guy really cares about music and musicians. Giving. I like him. Good people. Crazy talented. Seeing him play the drums was everything.

Do yourselves a favor and please show up to one of his talks. Any of his talks. Let him read the alphabet to you if that is all he doing. Last night I went on a wild, funny, profanity-laced, self-deprecating British wit-filled ride with him as he took myself and his audience  from the north of England to global fame with Public Image Limited and through the depths of hell and back. It was so unbelievably good. It was so good that at least for the night I forgot my troubles. I forgot the sadness of losing my mom on the 1st of this month. I forgot for a moment that while I was literally holding my mom's hand at her death bed, I got the call that my house in California was being sold in two weeks- you know, the one with all of my belongings in it and my home for a year and that on what would have been her birthday on December 11th I have to turn in her car.

Winter. Detroit. No permanent home. No things. No car.

This is a challenge.

I have faced plenty of other challenges in life and bested them all. The difference with this one is that it contains so much sadness that I have to rise above. A boyfriend or pet can be replaced but not your mom. When it is done it is done and you can only go live a good life because that is what she would want. Otherwise she is gone and you can't get her back. Another is there is no mother to call to say she loves me, to remind me how "If anyone can get through this Michele its you. I don't know where you get it from but you astonish me at every turn. I have faith in you that you will pull through this. You always do.  " Word for word this is what she would say to me.

After Martin's incredible talk he and others played DJ. I thought to head out and then I thought otherwise. Did I have somewhere to be? Do I need to be up early? Do I have a curfew because I am "back home?"

It was "no" to all of these things (tho what I wouldn't give to have my mom here worrying about me going off into the night as she would do despite the fact I've always made it home and always will) so I stayed and danced,  chatted with people and gave myself the gift of a good time.  I lit up like an Xmas tree when the girl who put the event together Kat Paled (or as I like to call her "The Girl with THE Most Amazing Hair Ever!!!") mentioned that the sound man was in Electric Six. I walked over to him and said "You were at a gig of mine in Portland!" Indeed he was. He and his band were playing Dante's that night, my home away from home and gig spot while I lived in Portland. I was playing down the way at Valentine's and they had stopped by before their set.

This was the night at Valentine's. I call that my Bryan Ferry Jacket. 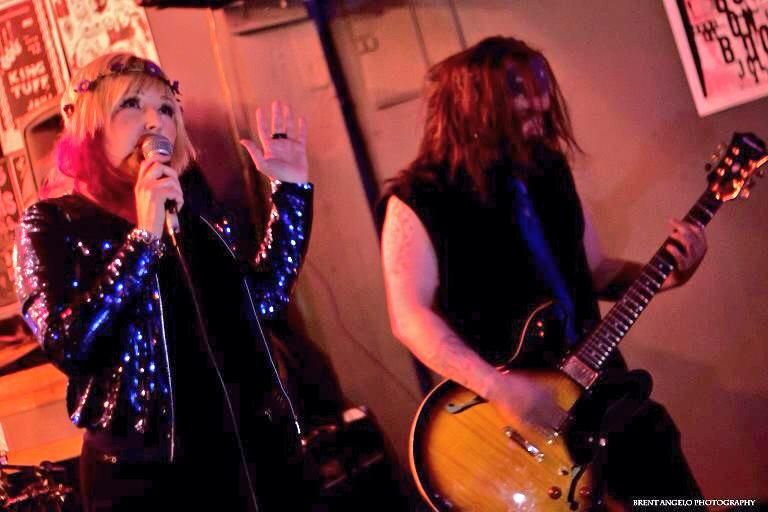 As you might imagine I feel a bit disconnected right now. I am unexpectedly stranded in my hometown after being gone for half of my life. Half!!  So even though I barely knew that musician I was grateful for something familiar that patched up one piece of what at present feels like a sinking ship despite the fact that I am still afloat. He encouraged me to move here because the music scene is hot. It is certainly a possibility. I have a record to get out. I planned to dovetail the release by putting a brand new line-up band together. I have to live somewhere in order to do this (also "cardboard" is not my color) and Detroit is booming right now! I would like my belongings of course tho. I'd like to see my things sooner than later. I have worn the same leggings since Oct. 12th (other than last night when I decided to be a person and switch it up. Thx for the cool pants mom!) because they are the only warm-ish pair that I have as I was in Florida before rushing up here. Yes, I wash them a lot.

Martin's talk and his kindness and understanding towards me that was rather magical.  I had looked forward to him coming here because I needed something to look forward to. My songs are about to be mastered. They are coming along beautifully despite the blazing inferno around me. Martin coming to town was the only thing  that has gotten me out at night since I got here in mid October. Though our lives could never be compared I related so much to some of his stories. While much of it was just interesting and jovial there were a few moments he shared from his life where he felt sad, let down or degraded. Times he felt he lost. He is coming out with a book. He can tell you much better than I can but when it is someone else's experience you look and think "But you are great!" just as others have said to me when I have hit a low point. Yet, I totally got it. I knew what that knife in the back felt like. I am an artist after all.

One story stuck out more than the others. I don't know anything historically about a woman named Maggie he spoke of. I first heard of her last night. In one tale Martin, Maggie and Lydon were in a car when Lydon began to lay into Maggie quite harshly just tearing her to pieces and no one stood up for her. At present from what I gather Maggie and Martin have made amends but he had asked her what she was thinking in the car that day. She said " I was thinking, Martin. Help. Please help me." but instead he sat silent, not helping her. When he told this story towards the end of his talk tears came down my face. I have been Maggie. I have been there getting laid into with not a soul in sight standing up for me. Its a horrifying feeling especially when you are on the road, there is no escaping and you are convinced you've not got a friend left on the planet (You do. You always do.)  More than just the connection was his  humility about his own lack of response to her silent cry for help-the one you shouldn't need to ask for out loud. I wondered if anyone who was the "Martin" in my story has ever felt remorse. Who knows? I do know that being able to feel it is a luxury and a trait only the best people have. I am certain of this.

After an hour or so of dancing  my troubles had melted even more. I felt revitalized. I had new ideas come to me that I could do with my music and old ones that were submerged came back to life. It was almost a miracle that I felt ready to meet this current challenge no matter how hard it might be just through music and just through knowing you are not alone- another way music connects and lifts us with its inherent ability to say "I understand you

Appropriately I ended the evening dancing to the Furs' Love My Way. I noted more people were on the dance floor for that song than any other. Do I know how to pick a producer and guitarist or what? I am glad he picked me too. I also noted my mood and outlook were significantly improved. I felt alive again and it felt really, really good. This is why music matters. This is its magic.

A theme of Martin's is "You're fucked. " If you are in the music business just face the fact that you are fucked.

Before I left I took whatever little cash I had on me and put it in his tip jar.  Hardly matched the value of what I got in return but gas money is gas money no matter who you are.

I went up to him on my way out to thank him and say "so long."

Oh, I will. One thing I know for certain is to go where the people are who cheer you on especially when they know exactly what you are up against and, like you, wouldn't trade it for the world.

The man has his own coffee. How punk is that? Coffee IS punk. 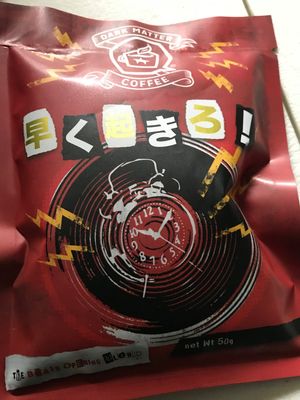 Books, Record and T-Shirts, Also punk. You can get them all here.